skip to main | skip to sidebar

What a beautiful summer we have had this year! Temperatures consistently in the 70's to upper 80's, and almost no rain at all. Combine that with 24 hours of daylight and it sounds perfect, doesn't it? Well, not quite. With all the hot, dry weather comes a lot of lightning. Combine that with millions of acres of dry timber and you've got a bit of a problem. Right now that means over 1.3 million acres of forest fires surrounding us here in Fairbanks, Alaska. We have been beyond fortunate though, as the winds have not been blowing the smoke right into the Tanana Valley as they usually do all summer during an active wildfire season.  We have had sporadic smokey days, and only a few orange and red air quality alerts. The last week has been the worst of it, but it isn't too bad so far. The forecast is for continued warm and dry weather through the next several days, with smoke. The fires closest to Fairbanks are the Minto Flats South Fire at 245,000 acres, about 40 miles away and the Wood River Fire, about 27 miles south of Fairbanks. Here are some photos taken along the Parks Highway near Denali National Park on July 4th. Even though it was very warm, we had to keep the windows closed because the smoke made it hard to breathe. 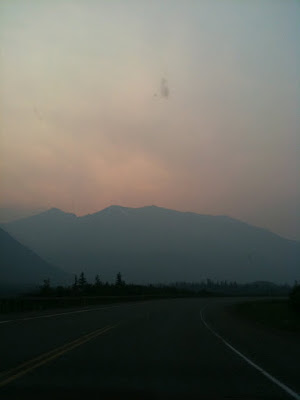 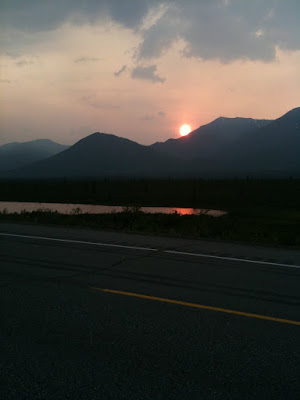 The camera lens definitely cuts through the smoke, but you can get an idea of what it looks like.
On Wednesday, we watched smoke roll in from the Minto Flats South Fire about 3 p.m.  I stood on the sidewalk in front of Gulliver's Books and took a picture to the east, and then immediately turned and took a picture to the west. You can see a very dramatic wall of smoke rolling in over the hills! 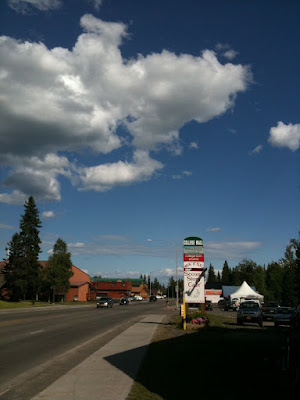 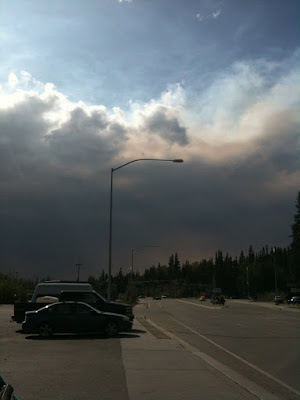 Later that evening we went to Amanda's softball game after the smoke had descended upon the city. These were taken about 8:30 pm. That funny spot near the people in the center is a big chunk of falling ash. 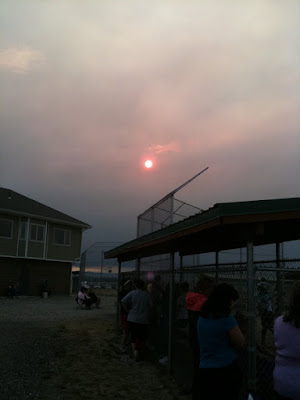 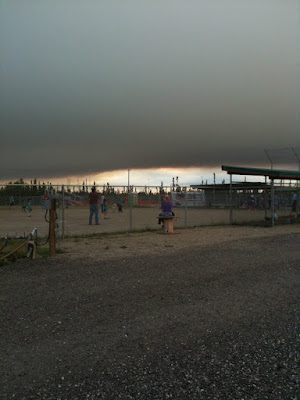 We were all covered in ash by the end of the game! Here's a shot of the roof of the car: 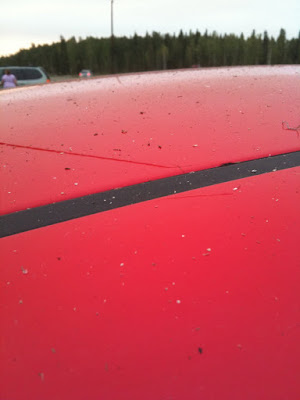 By midnight some of the smoke was gone, but an orange haze has been hanging over us each day. When you open the door or a window it smells like you are right next to a campfire.  Small amounts of ash continue to fall from the sky, reminding us of snowflakes. Not a happy image this time of year!
However, no one is complaining. This is nothing compared to the Boundary Fire of 2004 which began mid-June and lasted until the snow fell in September that year. We were covered in smoke from the end of June until August. It was in the 80's most days and because the air quality was so bad we were advised to keep the windows closed every day and to limit outdoor activity. Which wouldn't have been so bad, except homes do not have air conditioning up here in Fairbanks.  It was hot and miserable 24 hours a day. The southern border of the Boundary Fire was just about 5 miles from our house, so we had to be ready to evacuate for several weeks. That fire alone ended up burning over 537,000 acres. The wildfire total for the entire state that same year was 6.2 million acres. That was a very scary time for us.
In Alaska the weather is ALWAYS extreme, it seems. From bone-chilling cold in the winter to hot and desert dry with smoke in the summer. It is a challenge to live here!
Despite snow, rain, sleet, hail...or smoke, dogs must be walked! Here is Gus the bloodhound basking in the orange smokey glow of the afternoon. 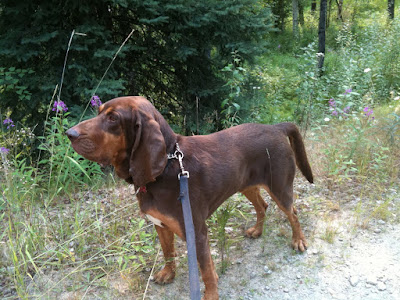 And we may not have cornfields like Bentley, beautiful flower gardens like Marmalade or the liveliness of Central Park like Wimsey, but we DO have the most beautiful fireweed! Most of our property has been left in it's wild state, and here's the beast on a walk next to our house. 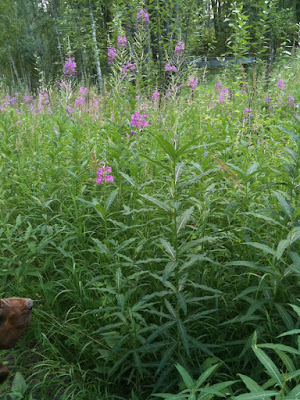 That's about it from Alaska today. The land where humans and animals can become chain smokers without even lighting up... 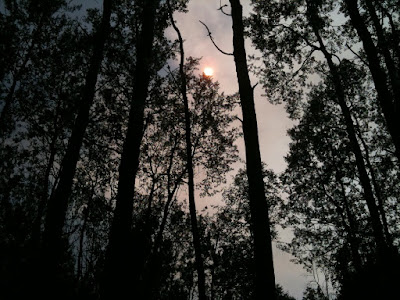 Great Post and I agree, you all in Fairbanks area get slammed by smoke and ash from those fires. Sometimes we can smell them down here in Anchorage.

Great picture of Gus and hope your hubby is feeling better.

I can't even begin to imagine 24 hours of sunlight. And on the other end 24 hours of dark would probably have me in a constant state of depression. But as I have told Ina I would love to come visit your beautiful state.

I found your blog through Ina and look forward to future posts.

Can long can you guys hold your breath???
That's certainly not a laughing matter.
Stay safe,
Kit

Hi, nice to meet you guys. Thanks for stopping by my blog. I look forward to following your adventures in Alaska.
~Twix

I completely admit that I had no idea that dry conditions and fires were common in the summer. Hope you stay safe and that the fires stay further away than in the past.

Last night was another interesting night. Another big cloud of smoke rolled in, covered us in huge chunks of ash, then was gone in a couple of hours!

The worst year was definitely the Boundary fire of 2004. It was so huge, relatively close to us and the weather patterns kept the smoke right on us all summer. That was pretty unusual. We always have a lot of fires, many are only monitored and have no crews fighting them.
We always think the folks in California have it much worse when they have fires. It's so hot and windy, and the fires are always threatening many homes.

It's hard for people to envision how remote most of Alaska is. The fires aren't usually near populated areas, sometimes they threaten a few remote cabins, that's about it. When a fire is 25 miles away, like the one south of us, that's actually 25 miles of nothing between the fire and Fairbanks. Nobody is worried about it threatening the town. And that would be within suppression range, so there is a crew on it.

Wow! Really scary. My grandparents live in BC and they've had a lot of fires too... Paws crossed for rain!

I just read that we've only had .04 inches of rain this month. And I don't think a drop of it fell up at our house.

Edie and Gus
I have 3 hounds: a Treeing Walker Coonhound named Dimond Willow, a Bluetick Coonhound named Molly and a Bloodhound named Gus. Gus is my blog buddy. He is a 100 pound, 3 year old liver and tan bloodhound. Gus has various nicknames: pee-hound, slobber-hound, tweedle-dumb. As a pup he was mostly known as "Satan in a Puppy Suit."